Dropped off at a nearby bar, Porcupine was just a 12 week old puppy when he came to St. Gabriel Animal Hospital. He was just supposed to have a checkup before going to his new foster but Dr. Sod fell in love instantly. Now Porcupine lives at the clinic and enjoys greeting all the new patients. 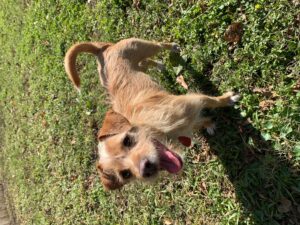 In early 2019, one of our staff members found Flash walking down the street dragging a metal chain that had been torn out of the ground. He was emaciated and exhausted. Flash had a possible home but he was returned as soon as they realized he was not potty trained. Flash has a healed fracture in his wrist that can bring some stares, but he is healthy and happy. Flash now lives with us at the clinic and will never be punished for his indoor accidents ever again. 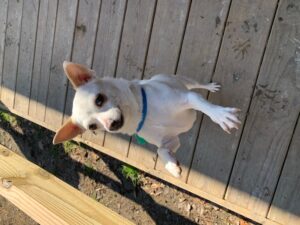 At only 6 months old Ginger was hit by a car, suffering from multiple pelvis fractures. When her owners wanted to euthanize, Dr. Sod offered them to sign her over instead. They agreed and Dr. Sod was able to fix all 6 of her fractures in 3 months. After spending all this time with Ginger, it was inevitable that Dr. Sod would fall in love. Ginger lives here at the clinic where she spends most of her time napping and eating boiled chicken. 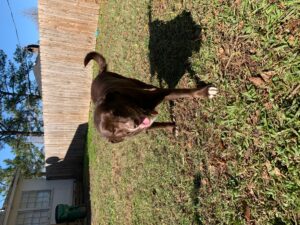 In November of 2019, Jack was brought to us by Heart of Louisiana Humane Society as a charity case. Someone had intentionally broken both of his back legs. Jack was only 10 months old and was the best patient. While Jack is still scared of almost all new people, he loves his St. Gabriel Animal Hospital family. From the first moment Dr. Sod saw Jack he knew we would be keeping him. We always say that Jack and Porcupine are long lost cousins. Jack is currently undergoing heartworm treatment and will continue to live here at the clinic with all his friends. 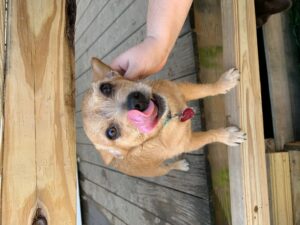 Darby was brought to us by Lafourche Parish Animal Shelter after he had been shot, causing a broken pelvis. On his first day here he bit Melanie, our lead veterinary technician as she was trying to take care of him. Instead of scaring her off, he only made her want to win him over even more. Over the next week, Melanie spent hours working with him to gain his trust and he finally began to progress and eat food out of her hand. Darby had several problems – ranging from a broken pelvis to severe heartworm disease. Now Darby has been neutered, fracture repaired, and is under going heartworm treatment. Even though Darby lives here for now, Melanie has already claimed him. Due to Melanie’s current living situation (involving stairs) Dr. Sod agreed to let Darby live at the clinic until she can take him home one day. 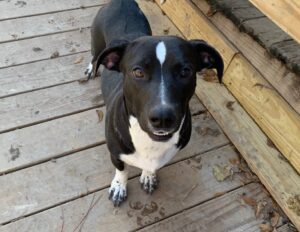 At just eight weeks old, Kai was an owner surrender to the rescue. We wanted to adopt him out, we really did. But Melanie and Dr. Sod absolutely fell in love with him and his personality. We ended up keeping him as a clinic cat! He cane be found greeting you at the door, typing on the computers, or hanging up on phone calls mid sentence! What ever he’s doing, he will gladly take pets and kisses.